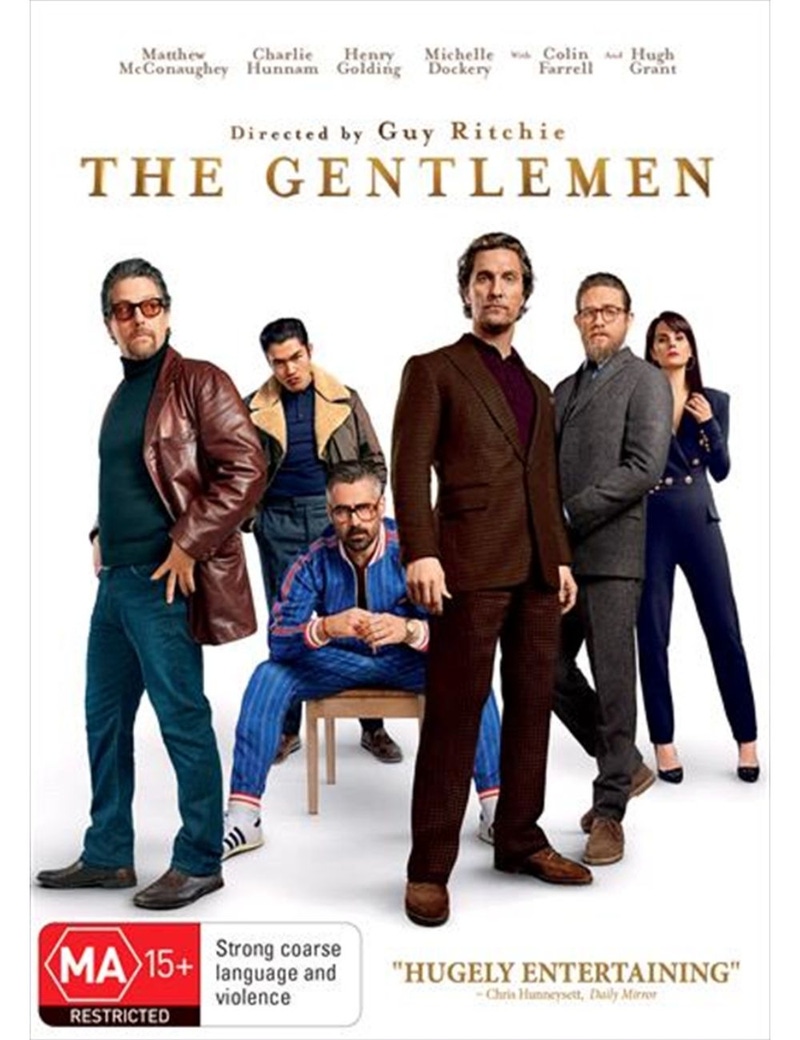 From writer/director Guy Ritchie comes THE GENTLEMEN, a star-studded sophisticated action comedy. THE GENTLEMEN follows American expat Mickey Pearson (Matthew McConaughey) who built a highly profitable marijuana empire in London. When word gets out that hes looking to cash out of the business forever it triggers plots, schemes, bribery and blackmail in an attempt to steal his domain out from under him (featuring an all-star ensemble cast including Charlie Hunnam, Henry Golding, Michelle Dockery, Jeremy Strong, Eddie Marsan, Colin Farrell, and Hugh Grant).

Review of The Gentlemen by Christopher Pattison

Recommending a Guy Ritchie film can be difficult, really you either love his filmography or you hate it. I happen to love Guy Ritchie’s body of work. If you are attuned to his style of comedy (Snatch, Lock, Stock & Two Smoking Barrels) and love the way he handles action (Sherlock Holmes and King Arthur: Legend of The Sword) then you will love The Gentlemen! The Gentlemen is my favourite Guy Ritchie film to date as it blends both comedy and action very well, to keep you both laughing and engaged the entire time. The fun, fast-paced story, humour and witty dialogue add to the energetic characters and well-written gags as well. The cast shine, with the likes of: Matthew McConaughey, Charlie Hunnam, Hugh Grant, Henry Golding and Colin Farrell filling the cast list and all smashing it out of the park with Charlie Hunnam and Hugh Grant leading the way, both actors’ delivery standout performances and really steal the spotlight. The other performances are also solid and with Ritchie’s fast-paced and energetic direction, there is never a dull moment in the films runtime. The plot delves into the underbelly of McConaughey’s Michael Pearson and ‘the laws of the jungle’ involved with his various business dealings. The film isn’t for the faint hearted, with plenty of violence, language and crude humour sprinkled throughout. If you like British gangster films with a touch of Guy Ritchie’s signature style and humour, than this is a must see for you.

Review of The Gentlemen (2019) by Peter Walkden

Michael Pearson (Matthew McConaughey) owns a highly profitable marijuana business which he built from the ground up. For personal reasons, Michael decides he now wants to move on from this life. He begins to have discussions with another wealthy man who expresses an interest in purchasing the whole business from Michael. But sadly, it is not that simple for Michael, even more so when word gets out that Michael wants to move on.
While Michael is trying to escape his current lifestyle, he finds himself dealing with many schemes around him, including blackmail, robberies and bribery. Who is behind all the dirty schemes and plotting?
The opening of this film is quite surprising. Not only does the film introduce a dramatic situation, but we get a taste of a mystery within a matter of minutes. We also witness Michael’s 2nd in charge, Ray (Charlie Hunnam), chatting with a man named Fletcher (Hugh Grant). Fletcher claims he has all the information Ray and Michael could want in regards to a traitor in their midst. Fletcher cannot just reveal the details all at once, instead of starting the story right at the beginning. Like I said, there is lots of mystery within of matter of minutes, and I love this film’s opening. The introduction shows us most of the key players, and there is also a great musical number during the credit sequence too (classic movie from director Guy Ritchie, right?).
But like most films from the director Guy Ritchie the key for the audience is to pay attention and be sure to keep up. The film is very dialogue heavy and sometimes many things are happening all at once. The conversations, as one would expect, are well-paced and witty. There is never a dull or uninteresting moment in this film thanks to both the plot and the characters.
The characters here are brilliant. And they are all part of a continuous game in which we, the audience, try to discover which character is terrible and which character is good. As the plot progresses, I kept having more and more questions. The plot is also unpredictable (other than one element which I cannot reveal due to spoilers). But there are many surprising moments in this film that movie lovers will either be shocked at or laugh out loud at. This is the type of film Guy Ritchie fans generally live for.
The Gentlemen is well shot and well filmed. I have zero complaints about the filming style here. I also loved some of the creative aspects in which the director takes his audience out of the moment and moves them to another level. One example of this is when Hugh Grant’s character talks about cinema and educates the viewers about aspect ratio, comparing 4:3 and 16:9 while the film shows the ratio. It is moments like this that are just brilliant and adds excitement to the film.
The supporting cast was also enjoyable. Michelle Dockery especially was fantastic. Colin Farrell and even Hugh Grant bring such surprising performances.
Overall, The Gentlemen is a blast. While the style of film may not feel as different as some may have hoped, it is loads of fun to watch. I watched this film with a giant smile on my face for the whole duration. Performances are brilliant, and the plot is fun and yet mysterious- worth a watch for Guy Ritchie fans.

Peter has written this review for Sanity. You can see more from Peter here